In organic farming we must stop talking about production or marketing in isolation, to make a cross-cutting approach and begin to refer to ecological food systems, where we talk about production and marketing, but also about proximity, sustainability, generational change, fixation in rural areas … concepts that should be implicit in organic products as values ​​to be highlighted.

This has been perhaps one of the main conclusions of the Tertulia #BusinessAGRO Marketing and Profitability of Organic Agriculture that took place on July 3 at the House of Culture of Carlet, and that was attended by Mª Teresa Cháfer Nácher , Director General of Rural Development and PAC of the Ministry of Agriculture, Rural Development, Climate Emergency and Ecological Transition of the Generalitat Valenciana at its inauguration.

With a capacity of more than 180 people, this discussion forum on one of the fastest growing production models in our country, has been organized by Siete Agromarketing and eComercio Agrario, with the collaboration of the Committee of Ecological Agriculture of the Valencian Community and the Unió de Llauradors, and the sponsorship of Compo Expert, Demoagro Specialty (Turis, Valencia, from October 1 to 3) and Comercial Química Massó.

This has been highlighted by José Antonio Rico, president of the Committee of Organic Agriculture of the Valencian Community: “This region has become a national reference, leading the growth in both the number of operators and the certified area. During the first semester of 2019 we are in a position to affirm that we will continue being the spearhead of the ecological sector in the national scope “. In this context, Mª Josep Ortega, mayor of Carlet wanted to refer to the role of this municipality in terms of organic farming to host not only CAECV but events such as the one that has taken place today.

In this regard, Gissèle Falcón, General Director of Siete Agromarketing, has presented the #BusinessAGRO brand as the best scenarios to advance in the necessary training of the sector, meeting points where to debate on topical issues for the agri-food sector, such as the case of organic farming that today has brought us to Carlet.

For his part, Carles Peris, General Secretary of Unió de Llauradors, remarked that the ecological sector has a great future, so from this entity they will continue working for this business model: “Our doors will always be open to guide, train and support the producers. ”

To conclude this inaugural table, Mª Teresa Cháfer Nácher, Director General of Rural Development and PAC of the Ministry of Agriculture, Rural Development, Climate Emergency and Ecological Transition of the Generalitat Valenciana, has pointed out some lines of action of the Ministry in agriculture ecological: “in 4 years the ecological surface has gone from 5% to 15% of the total agricultural. But we must not only work in production, but also in marketing “.

As measures, Chafer stressed that from the regional government has adopted a regulation to reduce the cost of certification of organic farming up to 70%, a step that undoubtedly contributes to encourage the commitment to this sector.

This has been precisely another of the points that has been highlighted in this inaugural table: the power of organic farming to attract young people to agricultural activity, thus helping to solve one of the problems that the sector has always had, which is not it is another than the generational changeover. 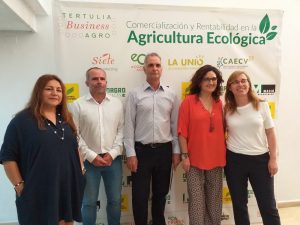 The Comunitat Valenciana is at the forefront of the growth of organic agriculture: only in 4 years has the ecological surface gone from 5% to 15% of the total land.

The event, moderated by the agri-food journalist and communication expert, Álvaro Bárez, has been structured in two gatherings. 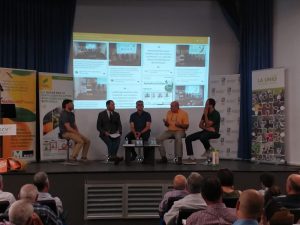 The first of the dialogue tables has had the participation of Javier Vázquez, R & D Manager | Fertigation & Organics Specialist Compo Expert, who has exposed the need for a good knowledge of the soil and its organic materials in order to carry out a correct and successful fertilization, at the same time that he has presented the Compo Expert solutions for this sector.

With a capacity of more than 180 attendees, the event could be followed through the RRSS under the hashtag #BusinessAGRO, generating more than 1,231,306 hits, and 427 tweets.

For his part, Raúl Moral, Professor at the Miguel Hernández University of Elche and Researcher of the Agrocompostaje Project between UMH and Generalitat Valenciana, explained what this project consists of, and the benefits it brings to the ecological sector: “It is a reality the lack of organic matter to make organic production. Faced with this need, this project emerged. Now it is the farmer himself who manufactures his compost from waste. This allows you to visualize and know much better aspects than previously unknown about eco production “.

Abel Zaragoza, Head of Development of Semioquímicos Commercial Chemistry Massó, has given us the keys for a correct health in ecological agriculture: “There are several problems, the regulatory ones, the ones of residues and the resistances. These are the 3 Rs that we must address in terms of health. ” In relation to the proliferation of pests, Zaragoza has stressed that currently “the problem lies in that we do not know our crops, we perform treatments because they do it in the adjoining farms. And that should not be, we must be students again, know the field and use the different tools that exist to combat pests and diseases. ”

Finally, Paulino Sanchiz Mallebrera, Commercial Director Cooperativa Mañán, a cooperative association formed by AgroMañán and Frutos Secos Mañán SCL, which can boast of having the largest production of nuts in Spain, has shared with the attendees the keys to its success, and his vision of the future in the face of increased almond production: “While countries like the US they are increasing their production in conventional, they do not show interest in the ecological, and that is where we have an opportunity to grow, to gain market share and above all to position ourselves first in Europe “. Sanchiz has also pointed out as a success factor having opted to diversify towards other uses of almonds, such as cosmetics or dairy products. 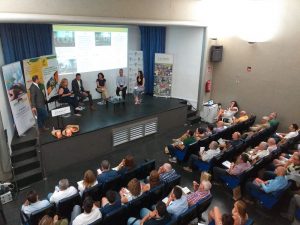 The second table has addressed whether Ecological Agriculture is a Fashion or Reality. María Dolores Raigón, Professor at the Higher Technical School of Agronomy and the Natural Environment of the Polytechnic University of Valencia, has been blunt in this regard: “it is not a fad, since the consumption of organic products has been increasing for years, although it has recognized that the levels They are low compared to the rest of Europe. ”

Joan Riera, Sector Director of Food Kantar WorldPanel, has provided some data in this regard: “64% of consumers have ever tried organic products, but only 6% buy them regularly, so still a long way to go . When we speak of ecological, we think of a young consumer, but it is not like that, they are bigger buyers, with higher income, more worried about their food. And in preference, the next, the local to the ecological wins. ”

In this sense, Raigón has highlighted the need to talk about ecological food systems, where not only production is taken into account, but also marketing channels, proximity, the temporality of production, the establishment of population in rural areas … “They are concepts that we have to link to organic production, because the consumer is claiming it, to have a more transversal vision of this sector”.

Carrefour knows a lot about it. For more than 15 years they have been working with organic products, although it has been in these last years when it has grown the most, with levels that point to 35%. “We listen to the consumer and are currently demanding health (57%), respect for the environment (27%) and fashion products (12%),” said Nieves Giner Carbonell, Area Manager of the Directorate of Quality and Sustainable Development of Carrefour, who encourages the sector to continue working to achieve better varieties, with more flavor that will serve consumers. “Today we have more than 200 ecological references on our shelves. We can say that they can make a 100% ecological purchase at Carrefour, “added Giner.

To talk about the importation of organic products, we had the presence of Lucía Torregrosa, National Coordinator of organic products SOIVRE, who has provided relevant data on these imports: “In 2011 there were 7 certifications of entry of eco product, in 2018, more than 700 through the port of Valencia. These years ago, there were many products that were immobilized in customs, but now these data have decreased. ” The main organic products that are imported include sugar, cocoa, nuts and purees.

For his part, José Antonio Rico, president of the CAECV, has recognized the current scenario of organic production is much more complicated than that of a few years ago, especially in terms of pests and diseases. However, he has encouraged to continue betting on him, convinced that it is the future: “For the consumer it is important to know who is behind any organic food. It is something that is valued very much, because behind any organic food there is a story, and that story should not be lost. ” Rico has recognized at the same time that at the level of commercialization, the current rules of the game have to be modified, participating along with the distribution in the decision-making when determining when and how the products enter the lines: “It is already being done in distribution chains in Switzerland, and with great success. ”

Both the public and the virtual public have been able to continue the journey through the RRSS under the hashtag #BusinessAGRO, generating 1,231,306 hits, and 427 tweets.

“Women have been and are levers of modernization on farms”