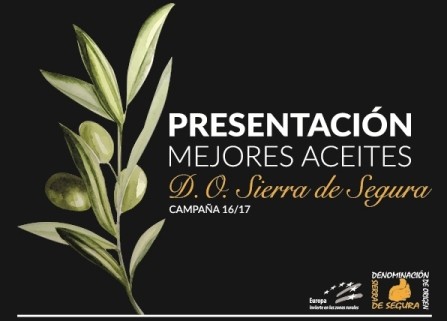 The Regulatory Council of the Denomination of Origin (C.R.D.O.) Sierra de Segura entrusted to Siete Agromarketing the presentation of its ‘Best Oils of the Campaign 2016/17’. This outstanding event took place last December 14th, in a dynamic event held in the Valle Inclán Hall of the Círculo de Bellas Artes in Madrid.

To the event, inaugurated by the president of the Regulatory Council of the D.O. Sierra de Segura, Ángel Sánchez López, attended numerous institutional representatives, such as Antonio López Rus, director of the Business Area Jaén III La Caixa-Agrobank, entity sponsoring the event, Javier Maté Caballero, deputy director general of Differentiated Quality and Ecological Agriculture of the Ministry of Agriculture and Fisheries, Food and Environment (MAPAMA), Ángeles Arquero Coloma, Director General of Direct Aid and Markets of the Regional Ministry of Agriculture, Fisheries and Rural Development (CAPDER), and Francisco Reyes Martínez, President of the Diputación de Jaén. 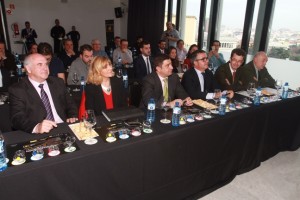 Authorities participating in the event.

The President of the Regulatory Council of the Sierra de Segura, has highlighted the importance of this Denomination for the more than 8,000 farmers. In this sense, the Deputy Director General of Differential Quality and Organic Agriculture of MAPAMA and Ángeles Arquero, Director of Direct Aid and Markets of the CAPDER have put in value the importance of the quality of oils covered by the O.D. for the sector as a whole.

For his part, the president of the Diputación de Jaén has expressed the commitment of the institution he represents with the farmers of that province, the main producer of olive oil in Andalusia and, ultimately, national leader. In his appearance, Francisco Reyes has also had an impact on the need to carry out policies of positive discrimination in the form of aid to the mountain olive grove, due to the harshness it demands. And in his opinion, “if we do not value our oils and do not protect their farmers, the olive grove will disappear.”

Along the same lines, the director of the Jaén III Business Area, La Caixa-Agrobank, highlighted the commitment of his organization towards the modernization of the agrarian economy of the province, through vehicles that allow the exchange of knowledge.

The person in charge to put final finishing touch to this event was the Territorial delegate in Jaén of the CAPDER, Juan Balbín Garrido, who has made available to the D.O. Sierra de Segura, and all its farmers, the support of the Junta de Andalucía.

This event was followed through the RRs, with the hashtag #DOSierradeSeguraAOVE

Olivar of mountain, picual with character and guaranteed quality

With the announcement of the best oils of the 2016/17 campaign, the Council of the Denomination of Origin shows in Madrid the different qualities and distinctions of one of the best oils from the largest olive grove integrated in a natural park, with a unique and Differentiated, of great scenic value.

Fruity aromas, green tomato kernels and fresh grass, combined with the bitter and the spicy of the fresh fruit of the picual variety, is the characteristic flavor of this extra virgin olive of rural tradition

An olive tree that requires the use of the most rigorous environmental techniques, capable of preserving this unique reserve, the Natural Park of the Sierras de Cazorla, Segura and the Villas, through a strict control of production, certified by Olive Oil Extra virgin, without additives or preservatives, with a high content of oleic acid and natural antioxidants, such as polyphenols and vitamin E, which act as natural antioxidants.

The quality mark of the Regulatory Council of the Denomination of Origin of Sierra de Segura guarantees oils of the highest quality, having been produced before November 30 and which comes from green olives or envero. 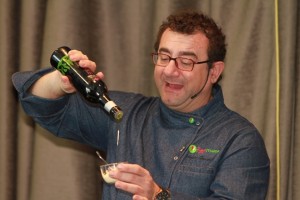 Chef Sergio Fernández elaborates one of his creations with AOVE of the D.O. Sierra de Segura.

These characteristics were appreciated by the guests at the event, businessmen, professionals of the olive industry and specialized press, in which they announced the Best Oils of the 2016/17 Campaign, through a Showcooking with tasting of the four award-winning oils, served in the avant-garde and innovative cups designed by the collaborator Elaia Zait. In addition to tasting the tapas created by the media Chef Sergio Fernández, with the four oils as protagonists.

The following finalists of this distinction were:
Saqura, produced by S.C.A. San Juan de la Cruz – Beas de Segura – and marketed through the cooperative group Olivar de Segura – Fuente de Génave – Jaén. Described by its intense green fruity, light touches of ripe olive and banana, balanced in the mouth, bitter and pungent of medium intensity, with a slight persistence of bitterness, and presented with the tapa ‘Quail Escabeche with Agua de Azahar y Saqura’.

Fuenroble, fruity intense green where the tomato and the grass stands out. Balanced and in the mouth reminiscent of the green apple and olive leaf. Produced and marketed by Potosí 10 S.A. -Orcera -Jaén, and with which the tapa was made ‘Popes stuffed with Cream of Fuenroble’.

With the tasting and tapas of these four best oils of the 2016/17 campaign, everyone present had the opportunity to appreciate the traditional flavor harmonized with the culinary creativity of Sergio Fernández, whose creation process could be admired by all during Showcooking, while discovering the characteristics of an olive grove, whose great part is located in 16,000 hectares of the total of 48,000 hectares that the Denomination has, located in the Natural Park of Sierras de Cazorla, Segura and Villas.

About the Regulatory Council

The Regulatory Council of the Appellation of Origin Sierra de Segura is the body responsible for identifying, safeguarding and guaranteeing the qualities of extra virgin olive oils which, with the Quality Mark of the Sierra de Segura Denomination of Origin, reach the consumer perfectly identified . It is a corporation of public law, dependent of the Ministry of Agriculture, Fishing and Rural Development of the Junta de Andalucía.

Thus, it is an independent entity qualified to carry out the duties entrusted to it, including the certification of extra virgin olive oils produced in the area defined as “Denomination of Protected Origin Sierra de Segura” – which Quality characteristics set out in the Terms and Conditions Manual and Quality Manuals.

The D. O. Sierra de Segura has its own tasting panel accredited by the National Accreditation Entity (ENAC) for sensorial analysis of virgin olive oils

There are only two designations of origin of the olive sector in Spain whose own tasting panel have received this prestigious accreditation. This action is part of the strong commitment made by the Regulatory Board for the sensory analysis through panel test as the only method that allows to determine with certainty that an olive oil meets all the organoleptic requirements to be considered extra virgin. 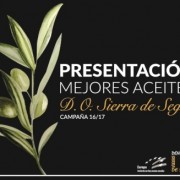 At your disposal, the Conclusion Notebook on Safe Fruit Marketing in China