The II Tertulia Business Agro ‘Olive Oil: US and Mexican markets’, which Siete Agromarketing held in Toledo on November 15th has met the expectations of public and participation, and has given as a main conclusion the excellent commercial prospects that offers the North American market, despite the political moment. Meanwhile, Mexico is configured as a destination to take into account and the Ministry of Agriculture of Castilla-La Mancha has designed a battery of aid to contribute to the size of the sector.

The 2nd Tertulia Business Agro ‘Olive Oil: US and Mexican Markets’, held on November 15th at the ‘El Greco’ Conference Center in Toledo, and organized by Siete Agromarketing and e-Comercio Agrario, hand in hand of the Institute of Foreign Promotion of Castilla-La Mancha (IPEX) and which was sponsored by Bankia, has given as a main conclusion the good commercial expectations offered by the US market for Spanish olive oil, despite the political situation that cross both US and Mexico after the victory of Donald Trump. 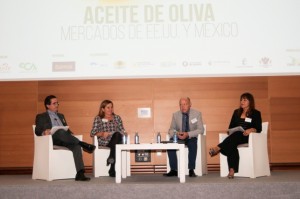 The discussion was moderated by the journalist Jorge Jaramillo and had an important influx of public, representative of the whole sector and related industries, as well as service and banking companies. It was clear that the US is the third consumer of olive oil after Spain and Italy, and in the last year its consumption has increased by 7% in value and 4.3% in volume, according to Nielsen.

In this sense, although it is still early and there are no studies that prove this, Pedro J. Domínguez, Unit Business Director of the consulting firm, has sent a reassuring message to the olive oil sector since the US has no production of its own, however its consumption is a trend that has been consolidated, “so you need to import”.

The Mexican market, even starting from much more modest volumes, is growing very important in consumption, specifically 15% according to Nielsen

Mexico is emerging as a market to take into account, given the expectations it offers to Spanish operators as a possible destination to create industrial fabric, as emphasized by Eduardo Perez Noyola, Operations Coordinator of Promexico.

Dimensioning and aid to the sector

However, the need to join forces and establish close collaboration among all actors in the sector to promote and strengthen trade and promotional action has become evident. In this line, Gregory Jaime Rodriguez, director general of the Agro-food and Cooperative Industries of Castilla-La Mancha, has announced the imminent entry into force of the regulation of the so-called Priority Associative Entities of Regional Interest, in addition to the implementation of a new measure of the Rural Development Program, whose objective is to encourage the creation of producer groups to promote joint marketing policies, with special emphasis on foreign markets. For its elaboration it has counted with Agro-alimentary Cooperatives of Castilla-La Mancha, as indicated its director, Jose Luis Rojas Sánchez.

In the same vein, Fernando Laviña Richi, Director of the Institute of Foreign Promotion of Castilla-La Mancha (IPEX) recalled that the institution of which he is part has launched an Export Initiation Program that provides technical support and Financial to all those entities that want to open their business to foreign markets.

Along with these measures, the coordinates that are marking and should mark the internationalization of the sector are the commitment to the quality and knowledge of destination markets

In this sense, Pedro J. Domínguez, Unit Business Director of Nielsen, has emphasized the need to deepen the knowledge of North American consumers, characterized by their great heterogeneity. Parameter defended also by the representatives of Aceites García de la Cruz and Faiges Borras, for whom it is also essential the knowledge of the administrative and legislative functioning, being the parameter that makes the difference in the commercial relations with the US the constancy in all the aspects, because, as has become clear, unlike the Spanish market, the US does not understand fluctuations.

A topic of maximum interest for the operators, especially taking into account that the exchange rate of the currencies is not stable and that the systems of collection are not equal in the US and in Spain. That is why Enrique Alberto Cabello, Foreign Trade of Companies of Bankia, has pointed out the importance of having specific services such as prefinancing of exports with which the entity has, and whose objective is to accompany exporters.

All this helped by a productive modernization, as highlighted by Alfonso Gómez Porras, Managing Director of Todolivo, special collaborator of the event. This modernization is aimed at improving the profitability of the production and the excellence of the varieties, and that the company has achieved with the olive groves in hedge.

Another of the chapters that deserved special interest was the need to defend the sector against smear campaigns, mainly from Italy, as pointed out by Aniceto Gómez, Vice President of Centroliva, whose origin is the increase in sales by Spanish operators.

The representative of Centroliva has also manifested the need to defend cornicabra oil, a unique variety in Spain much appreciated in other markets like Italy

In that sense, Gregory Jaime explained that in the Ministry is working on the defense and promotion of the cornicabra, although it is true that much remains to be done. 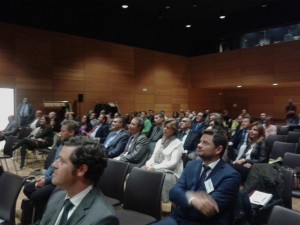 Public assistant to the event.

In addition, it was also evident the need to deepen and continue the promotion of olive oil abroad, with special emphasis on quality figures. In this sense, the Interprofessional of the sector, also a special collaborator in the Tertulia, has made a promotional video with Rafa Nadal as ambassador of Spanish oils and was projected during the event. Although both Infaoliva and Centroliva value this step, both entities have agreed that this measure is not enough.

For its part, Rosa Ana Gómez, Councilman of Tourism of the City of Toledo has also praised the benefits of olive oil and the importance it implies for the industrial fabric of the city, qualified as the Spanish Capital of Gastronomy 2016, mention through which translates the excellence of this product, both its citizens and tourists who visit the city.

Enrique Delgado Hidalgo, General Secretary of Infaoliva, has also indicated that the institution he represents has just approved a budget item to make a specific promotion campaign in the United States.

Lastly, Gissele Falcón, Director of Siete Agromarketing, emphasized the importance of the Tertulias Agro Business as a meeting point and impetus for the agri-food sector through dialogue, and whose first edition took place last September in Lleida, where addressed the marketing of safe fruit in China.